Life in the Village and beyond, based around the interests of my life.

Life in the Village and beyond, based around the interests of my life. Sunset at Telegraph Point.

I have been wanting to write some comments on Carter hand planes for some time, ever since I wrote about Falcon Popes. 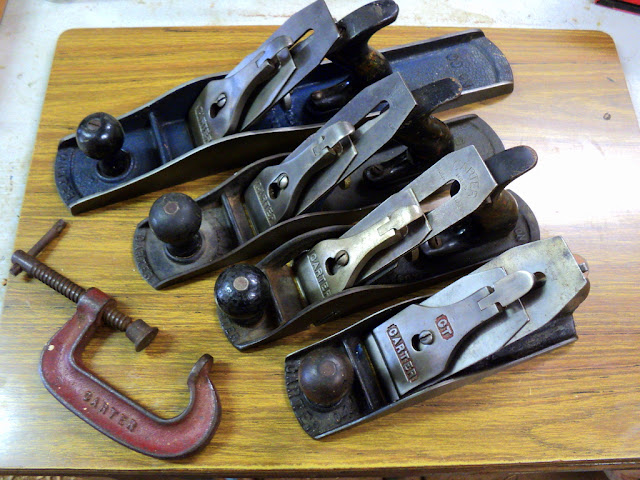 Several Carter handplanes have come my way over the years, and it seems appropriate to give them a short review, as they still surface (heh heh) at markets and garage sales. 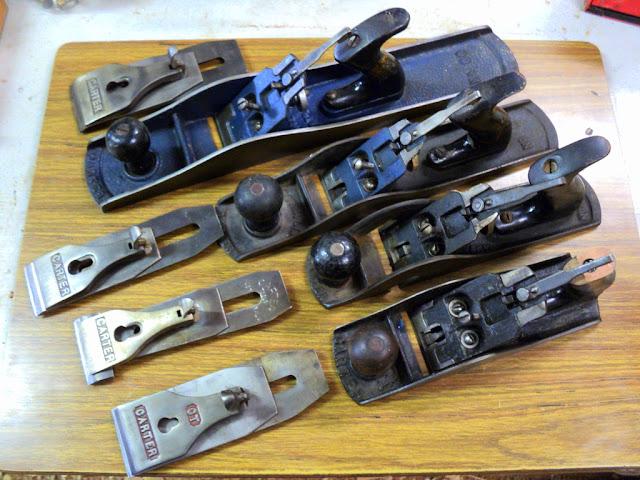 One interesting aspect of Carter Hand Plane manufacturing, was the way that the company sub-contracted out the casting work to different foundries around the Sydney area.  Because of this, there are often differences in both shape and quality among Carter planes - even those of the same model.

Even the frog castings show differences in design - perhaps reflecting the variations from the different foundries.  The Number 06 fore plane at the top shows a different frog and base casting from the others.

All frogs have the looped lateral adjustment lever - a simple and effective design.
None of them have the frog fore and aft adjuster screw that was found on Stanley planes, and copied by both the Falcon Pope and Turner handplanes that were also made in Australia.  Just like Sargent hand planes in the United States, Carter decided that their planes didn't need them.
This simplified the castings for both frog and base. 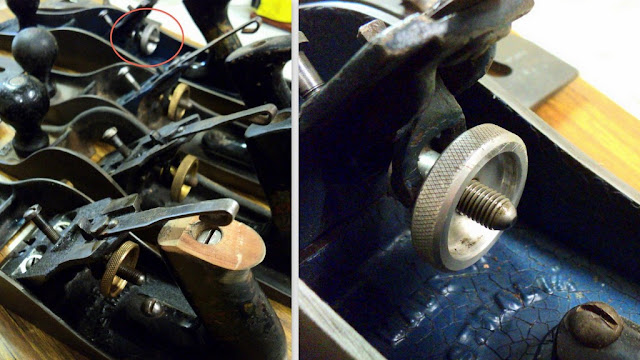 All handles are made from Australian hardwood - normally coachwood - and all are painted with black enamel.

The handle on the 4-1/2 has been through the wars, and has lost its spur - as well as showing a crack across the middle.  These wounds were not uncommon, given the tough lives that these tools often led.  Bouncing around in a tool box from one building site to the next, can cause damage and always takes a toll on appearance. 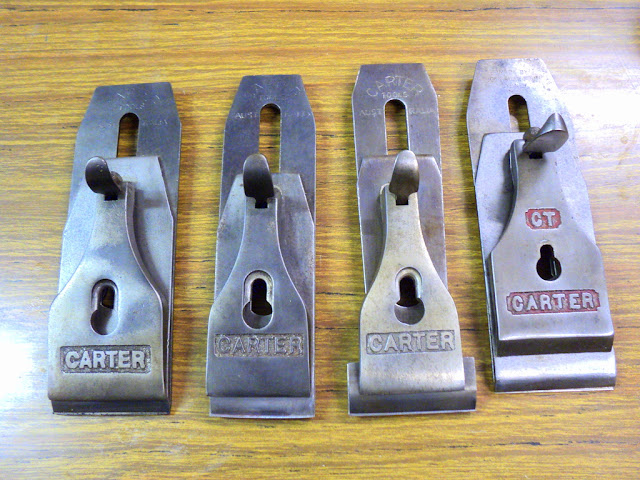 All have their original Carter blades except for the 4-1/2, which has one made by John Shaw of Sydney.

John Shaw produced plane blades, HSS tip bronzed to the main body of blade.  There isn't much left of this one, but a comparison with other similar blades shows how long it probably was when new.

Here are two blades with HSS tips bronzed to the main body.  The first was made by Titan and the second made by Stanley - probably after they took over the the Titan Manufacturing Co Pty Ltd.  Interestingly, only Stanley Australia seems to have made such blades, and not any other Stanley enterprise from any other country.  This makes me think that it was an Australia-only phenomenon - and one probably started by John Shaw and copied by Titan - to be continued by Stanley when they bought out Titan.

The reason for this is probably to be found in the design of the frog.  All Carter frog castings have support for the blade only at the very top, and the very bottom.

Compare that to the bedding for the blade provided by Falcon Pope and older Stanley frogs.  There is blade support there - all the way from the top to the bottom of the frog. 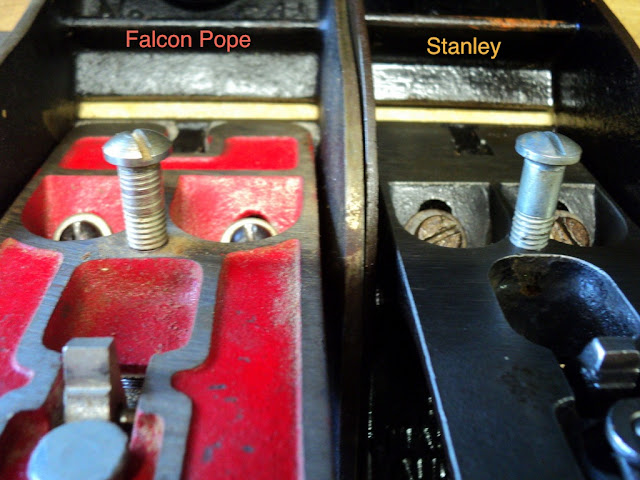 The thought occurs to me that the Carter design allows for less exactitude in casting, since only the top and bottom faces need machining to the one plane in order to bed the blade.  This would save time, and allow the frog castings from different foundries to be finished off with minimum grinding.  A simple solution to the obvious quality control issues attached to multiple castings from multiple foundries. 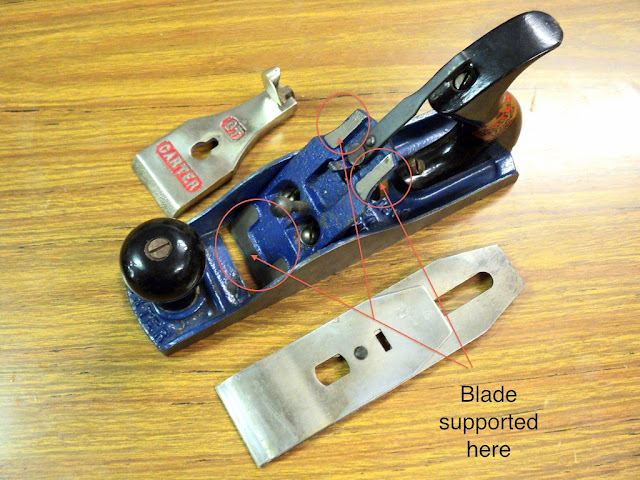 An ordinary thinner Stanley-type blade would likely experience induced chatter with a frog design like this.  The Carter blades, being so much thicker, resist this chatter and cut quite well - even with such a frog.  Of course, their extra thickness also makes them popular with woodworkers - as replacement blades in other makes of bench plane.

The bodies of the Carter planes are robust, and usually of thicker and heavier dimensions than the equivalent Stanley.

Comparing the cheek thickness of Carter number 5's and number 4-1/2's with those of a Stanley, the variations of Carter's foundry castings are apparent.  The carter 4-1/2 is particularly odd, with one cheek significantly thinner than the other. 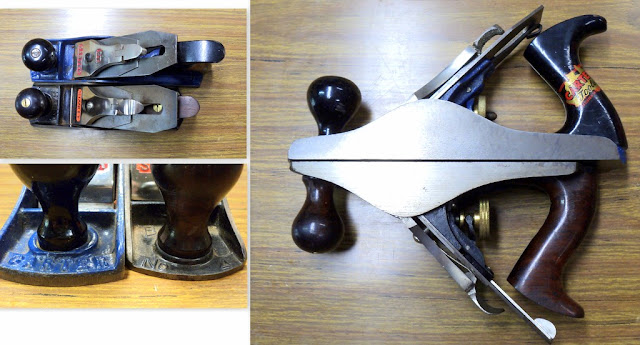 Here are two number 4 planes - one Carter, the other a Stanley.  The differences in length and thickness are obvious.  The Carter is significantly larger, even though it has the same width blade as the Stanley - 2 inches.

All of this translates into extra mass - the Carter is nearly a pound heavier.  It is also not as refined as the Stanley.  Here it is up close: 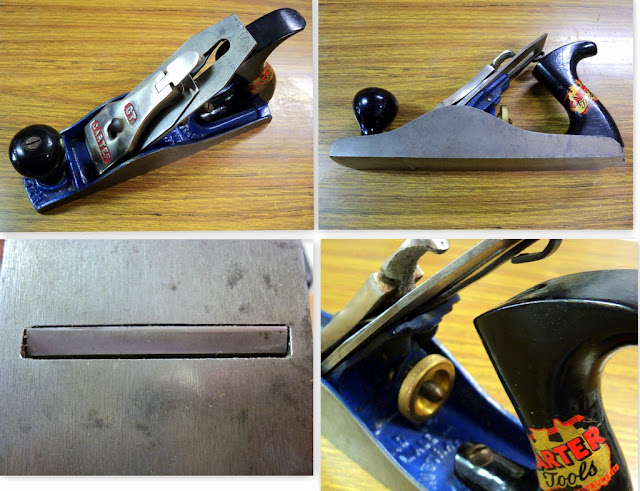 Surprisingly, it can still be set up to function as a tolerably good smoothing plane.  A sharp blade and a tight mouth can produce quite reasonable results. 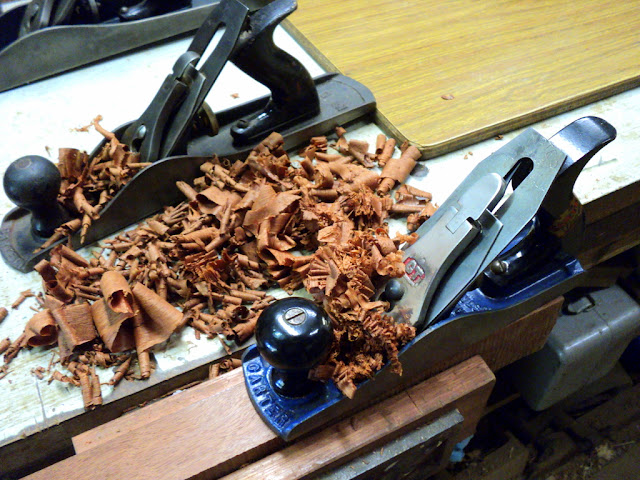 Here is a piece of Australian rosewood that has first been dressed by a Carter number 5, followed by the Carter number 4 smoother.  The grain was swirling and in places a little tricky.  The Carters did a presentable job on it. 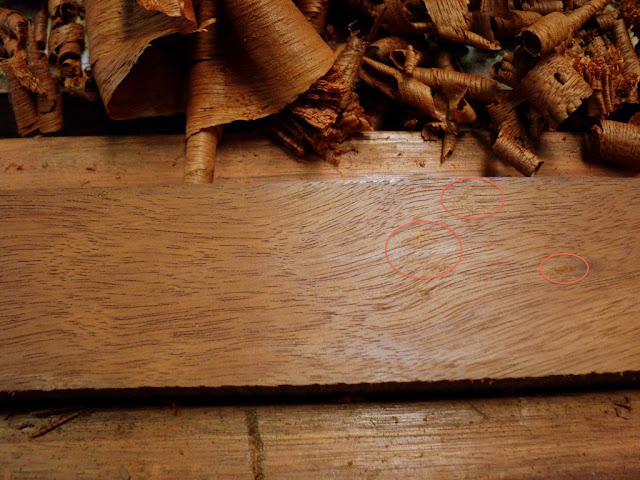 Apart from the minor tear-out shown, the remainder was glassy smooth.

Conclusions
Carter handplanes were made to fill a niche in the building industry, at a time when anything was better than nothing, and they were turned successfully to cabinetry as well.  In these tasks they performed creditably.  They are a mixed bunch, with some examples being very well made, and others a little rough and ready.  Time has moved on, and consistently better made examples of handplanes have appeared and become commonplace.

For all that, Carters are somewhat rarer than others, simply because they were manufactured for such a short time.  A good one is well worth having as a working tool in any workshop - others may only be added to collections as historical footnotes.

The blades are something else again.
I have never come across a bad one, and the extra thickness is appreciated by hand plane enthusiasts, and those who want good performance from their plane - no matter the brand.  If you get a chance to own a Carter blade - jump at it.

Are Carter planes worth buying?
Definitely!
It may end up being a good one - or - it may just be your little part of Australian toolmaking history.
Either way, the blade alone will be worth the purchase.


For more on Carter Tools including other planes, follow this link to the
Hand Tool Preservation Association Of Australia

Welcome To The Village Woodworker Blog

The Village of Telegraph Point, on the beautiful Mid North Coast Of New South Wales, is my home.
As a small settlement, it is seldom seen by travellers and passers by. Yet it is rich in personality and in the people who make up its community.
Woodworking is one of my passions, and I am pleased to be able to share it - both within the Village - and more widely via this blog.
Travel the journey together with me, and comment if you would like. We can all learn something new every day - it is the essence of life.
Carpe Diem my friends.

All material on the The Village Woodworker Blog is copyright and can only be used with the express permission of the author, Tom Sheppard